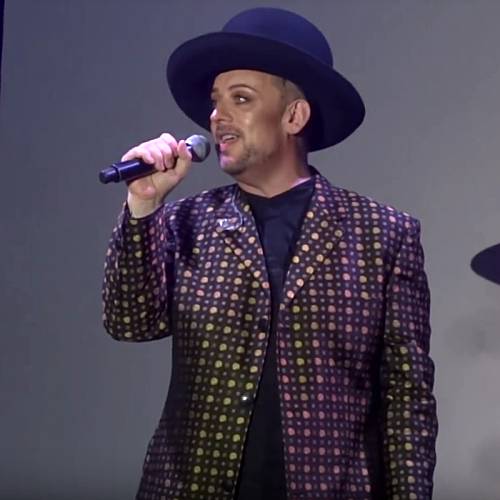 Fitzy “How close were you to getting stuck in Australia?”
Boy George “I just want to say I wouldn’t consider it being stuck, I’ve spent a lot of time in your fine country but I did want to get back to the family even though in London it’s a bit nearer. I just thought for me psychologically it would be better to be back home in London”

Wippa “What’s it been like? Are there people on the streets?”
Boy George “It depends where you are, I’m currently in a rented apartment because my house is being refurbished so I’m really bang in the centre of central London in Soho. It’s quieter in the city where I am, it’s a bit of a ghost town”

Fitzy “I’m really excited about the music that we might hear in 2021 and 2022 because artists are stuck at home writing, we could have some amazing music on our hands”
Boy George “I think we will, I’ve been doing a lot of writing, finishing things, being creative and just trying to keep myself sane by being creative. I think that’s one of the great things about having this space, because we have got time to think about things in a slightly different way and we don’t really know when we’re going to get a chance to perform again. So it’s an interesting time, it’s challenging..”

Fitzy “We need to ask about this because we’re trying to work it out” (plays ‘Two Voices’ promo). “What does that mean George?”
Boy George “Don’t panic it’s not demonic, it’s not somebody reenacting the exorcist. It’s Mongolian throat singing, so there’s a double tone. It’s quite spiritual but it does lead to some controversy”. “It leads to some ‘okay yeah is this fair?’” “There’s people being turned into bands, married couples being turned to duets, it’s chaos!’