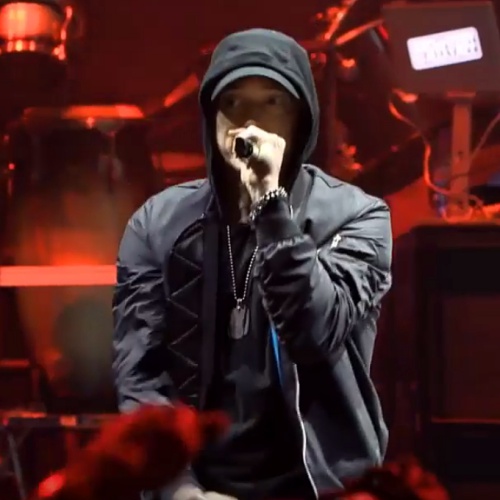 The 47-year-old rapper reportedly came face-to-face with an intruder, who is alleged to have slipped past the star’s security and made their way into Eminem’s living room.

According to TMZ, the alleged break-in happened earlier this month at around 4am at Eminem’s home in a gated community in Detroit, Michigan.

Law enforcement sources claim the suspect – believed to be 26-year-old Matthew David Hughes – used a paving stone to smash a kitchen window and climbed inside the house, but his alleged actions set of Eminem’s alarm system, which woke the rapper.

The ‘Lose Yourself’ hitmaker then got out of bed to find the alleged intruder in his living room, and called the police.
When cops arrived on the scene, they took the suspect into custody and booked him on charges of first-degree home invasion and malicious destruction of a building.

As of the time of writing, Hughes is being held at the Macomb County Jail on a $50,000 bond.

Meanwhile, news of the alleged intrusion comes just days after Eminem announced he will be auctioning off a pair of his highly coveted Jordan 4 Retro ‘Carhartt x Eminem’ sneakers to raise money for coronavirus relief efforts.

The footwear is one of only a handful of pairs in existence, and the auction comes after Eminem first debuted the shoe back in 2015 when he made just 10 pairs available for bidding on eBay, where proceeds went to his Marshall Mathers Foundation.

Ever since the first auction five years ago, only a few pairs have made it to Eminem’s family and friends, and any pairs that have made it to resale in the past have been sold for more than $20,000.

Revealing the news on Twitter, the ‘Real Slim Shady’ hitmaker wrote: “Cleanin’ out my closet… donating extra pair of my @Jumpman23 @Carhartt 4’s along with a vintage T to @stockx. Proceeds go to the COVID-19 Solidarity Response Fund. http://shady.sr/StockX (sic)”

Each ticket for the auction costs $10, and hopeful bidders can buy as many tickets as they want to increase their chances of winning.

Olivia Rodrigo: ‘I wrote the bulk of the song literally crying in my living room’ – Music News