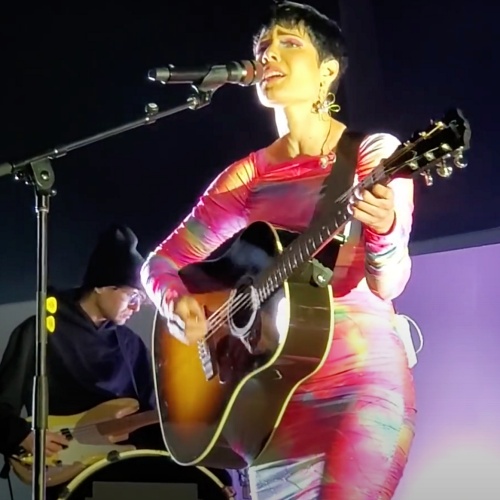 The 26-year-old pop star loves rock music and has even shown off her screamo chops on ‘Experiment On Me’, which was written by Bring Me The Horizon for this year’s ‘Birds of Prey’ movie soundtrack.

And the ‘Without Me’ hitmaker has insisted that she “definitely” wants to make a punk rock record at some point, but it “needs to come naturally”.

Speaking to Vogue magazine, Halsey – whose real name is Ashley Frangipane – said: “I do really want to, but it needs to come naturally. I’ve never sat down before and been like, ‘Okay, I want to make this type of album.’ The album kind of makes itself. When that time comes, it’ll happen on its own. I definitely need to do it eventually though, because I’m starting to age out of being angsty and punk.”

The ‘Be Kind’ singer also revealed that her dream collaborations would be with Grimes or Harry Styles.

She said: “I really want to work with Grimes, because I love her, and I have always loved her. I’m also everyone’s biggest fan. I’m such a fangirl. I want to work with Harry Styles. I loved his last record. I’m so proud of him just as a fan and as a peer. He’s a real one. I think we could make something really cool together.”

She wrote on her Instagram account: “I would love to do a whole album in the vein of nightmare and EOM. Should I start a side project or just say f*** it? (sic)”