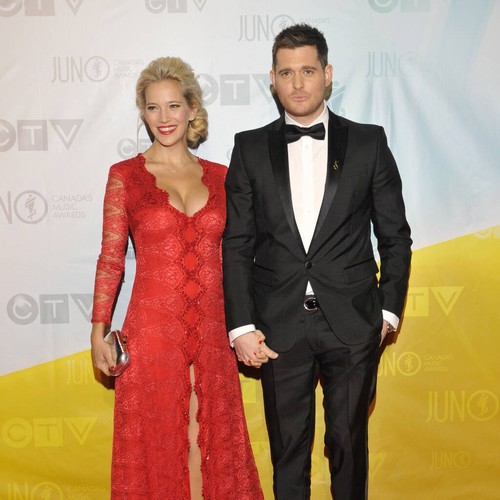 Michael Buble and his wife were targeted by angry fans after a video showing the singer nudging his wife with his elbow during an Instagram Live chat sparked controversy.

The Canadian crooner appeared alongside Luisana Lopilato on the social media site to chat to fans back in April, and many were left concerned when he appeared to interrupt and grab her, and the singer’s representative put out a statement calling the controversy “a failed effort of cyber bullying”.

Speaking on Argentinian TV show Intrusos, Luisana revealed that while the loved-up pair received a lot of support over stories surrounding the event, there was a lot of hate too.

“We received a lot of love from people but you wouldn’t believe the amount of people who sent me photos with weapons saying they were going to kill Mike when he reached Argentina, photos of knives from people laughing and saying they were going to cut off his fingers, leave a bomb for us or give him a beating,” she said, adding, “It made me afraid and I still feel a little bit frightened.”

Luisana added: “It’s not nice to receive death threats. There were a lot of threats. The positive messages we received outnumbered them but I am worried for my family. I suffered a lot with what happened.”

“It caused Mike a lot of pain too. He loves Argentina and he loves being with me in Argentina when I’m working,” she continued. “He loves the friends he has in Argentina. Can you imagine what it feels like to receive a photo from Argentina of a youngster holding a weapon and the warning: ‘This is what you’re going to get when you come here!'”

Insisting once again the father of three had never been aggressive towards her and they had been the victims of a “fake news” campaign, Luisana concluded: “Mike is a gentleman who is always concerned with trying to make me even more happy than I already am.”

Paris slowly comes back to life after weeks of strict lockdown

Harry Judd to be a dad again – Music News