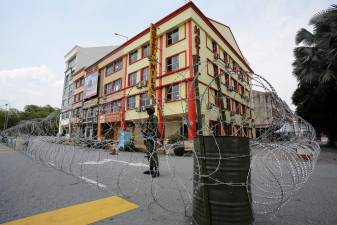 PETALING JAYA: The main battlefront in the Covid-19 war may have crossed the South China Sea but it is premature to assume that there is a reversal in the number of new infections in Sabah.

For two days in a row, the number of new cases in Peninsular Malaysia has exceeded that for Sabah, but medical experts warned that it could be other factors that are causing the change.

On Sunday, Kuala Lumpur reported 475 new cases, compared with 381 in Sabah. The numbers dropped to 392 for Kuala Lumpur and 288 for Sabah yesterday.

While medical experts warned that Sabah is not out of the woods yet, they also expressed concern with the sharp increase in the number of cases in Kuala Lumpur.

According to them, the more densely populated areas in the Klang Valley would be fertile ground for the infection to spread quickly, while the drop in the number of new cases in Sabah can be attributed to reduced testing.

The Klang Valley has a population of about six million.

Epidemiologist Datuk Dr Awang Bulgiba Awang Mahmud told theSun yesterday that the smaller number of new cases in Sabah can possibly be the result of a change in testing strategy.

He added that this would make it difficult to implement the usual containment strategy.

Awang Bulgiba said there is evidence that there is a large number of sporadic cases in Selangor and just like in Sabah, containment efforts will be increasingly difficult, leading to a surge in new infections.

He also expressed concern that the current measures being taken to curb the spread of Covid-19 have not been working fast enough.

“The time it takes for the total number of cases in Selangor and Kuala Lumpur to double has stayed the same for three weeks in a row. In Kuala Lumpur, it has actually shortened, showing that there is no let up in the spread.”

However, Awang Bulgiba said the country should not panic and rush into another movement control order.

“The cost will likely be too high. It’s better for the authorities to think up a change in strategy,” he said.

“Furthermore, the CMCO (conditional movement control order) does not completely curb movement. Therefore, there is still a risk of people picking up the infection while in public places.”

He said although the measures under the CMCO have effectively brought down the infectivity rate from 2.2 at the start of the third wave to between 1.5 and 1.0, consistent enforcement of the measures is still essential.

“There still is a high number of people flouting the standard operating procedure,” he pointed out.

Subramaniam said monitoring of migrant workers will have to be stepped up, as they are a high-risk group.

“Businesses should also allow more staff to work from home to reduce the number of people in the cities, public transport and in offices.”

He said MMA has proposed that the 7,000 general practitioners trained by the Health Ministry join the Covid-19 war. “They can conduct screening for Covid-19 cases.”

Manhunt for suspect who fled after release by MACC

Only 1 of 13 resorts in Pantai Hill receives approval — Exco