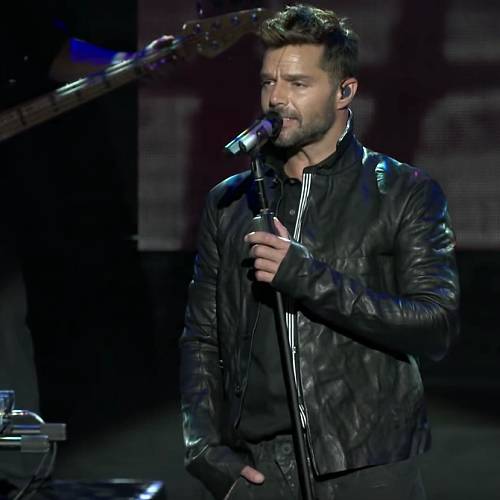 On the latest episode of PROUD RADIO on Apple Music, Ricky Martin talks about growing up in Puerto Rico, being in the closet during the success of “Livin’ La Vida Loca”, Bad Bunny, Kim Petras and LGBTQ+ allies, looking up to Elton John, and more.

In 1999, the world was giving me back the hours that I had put into music, the hours that I had put into this career. But there was a very special detail that was not letting me breathe, and that was the fact that I was the king of the world. My music was being heard all over the world, regardless of the language. I could high five God, but I wasn’t living to the fullest. I was sad. I was depressed. I would walk on stage to perform because that was the only way I could balance my emotion is to snap out of this heavy sadness that I was moving in. And then actually there came a moment that I said, we need to stop. We need to stop the tour. I remember I was in Australia and from Australia, we weren’t going to go to South America. And I said, I can’t. I can’t do this. I need to go home. I need silence. I need to cry. I need to be angry. I need to forgive myself for allowing myself to reach this level, to get to where I’m at. And I took some time and I took a sabbatical. I put things in order and still I was not ready to come out, but I was open with everyone around me, but I just didn’t have the strength to make it public. And then I started writing my book about my memoirs and everything that I had been through. But I couldn’t finish the book, because it was a very important link that I was trying to avoid. And then when I really did my work, spiritual work, I got to the place I was fighting as I was writing my book between saying, am I gay? Am I bisexual? Am I gay? Am I bisexual? And either it’s okay, just go within and do not lie to yourself. And then I said, Rick, you are very fortunate, homosexual, man. You are gay. And I wrote it and I pressed send, and then I cried like crazy. And I’ve been super happy ever since. So that’s more or less what I was going through when I was, livin’ la vida loca.

I think it’s extremely important that celebrities, for them to allow themselves to just be, and people will feel comfortable. Because our comfort, or let’s put it … The young generation’s comfort zone is a laptop, is an iPad. So whatever they get, the information that they’re getting from these celebrities that they respect and they admire, it has to be one of purity, of liberation.

And I think that for example, Bad Bunny, especially is doing an outstanding job and just letting people, “Who cares if I paint my nails? Who cares if I am gay or if I’m not.” The truth in this case, he’s not, but he’s a super powerful eye, that we need to support. Then we will forever be grateful, because we need them. They are an important part of our history. I like art and I appreciate it. I’ve worked for forever, but that’s what I needed to work with him. I needed to sit down, even though I’ve been doing this for many years.

But you have this young generation, that their instincts are so point, they are so in touch with what they are and who they are. And they don’t have the issues that we had growing up. Yes, there are still many men and women that are struggling the way we struggle, but there is something about this young generation that gives me a lot of hope. And because of their attitude, they are letting us know that, for example, my kids are not going to be dealing with half of the things that we dealt with.

I’ve always love Elton. And I have to say Elton because he was always been very supportive and very warm and he’s always been there. We’re not that close, but there’s always that sense of security when I’m around him, that … And then we just go back to everything that he’s been through. Even though we might agree on some things or not, but I just remember growing up and looking at Elton and saying like, “I love his music. I like his colors. I love his wigs. I love it. Do I want to be him or do I like him? I’m so confused.” At the end of the day, I remember just warm, loving, comforting … just emotions every time I saw him. Let’s give him a lot of credit for that.

I think we have to join forces. At this point it’s all about listening. It’s about learning, it’s about being respectful, and it’s about understanding that at this point it’s not about us. At this point it’s about giving the platform to those incredible voices that has helped us and has taught us about the injustices that, in this case the LGBTQ+ community goes through. Pretty attached to what the black community in this case, in the US goes through. But in the world, we have to understand that we thought we knew about racism and when all this happened we realised we had no idea. I’ve been wearing the shoes of my fellow sisters, the black community, the trans-black community that have always been struggling. They’ve always been screaming, “We need help. They are killing us.” And no one was listening. So you know what? This door has been opened where I believe all of the minorities will benefit from it because at the end of the day what will happen is that all the minorities will get together and will fight together for the same mission.

All good. All good. I’m in Los Angeles at the moment, dealing with this madness that we’re all dealing with. But my family is great. My husband is doing great. My kids are fantastic. My parents are healthy, and nothing but gratitude. Parenting is exciting and interesting and interesting, and add to it a little bit of a pandemic to the whole equation. Listen, it’s been fascinating just to be able to spend so much time with the kids. Although, since the moment they were born, pretty much, they’ve been on the road. I became a father not to leave them with grandma because I have to go to work. Actually, they have a lot of frequent flyer miles because they’ve been with me. They’re 11 years old. What I’m trying to say is that it’s been very beautiful to spend time with them, checking constantly, checkups, and mental health. Because I think it’s important in this lockdown just to ask them every day, “How are you feeling?” I am very aware of their emotions and they now, because of this pandemic, they can differentiate one feeling from another. So it’s been really interesting.