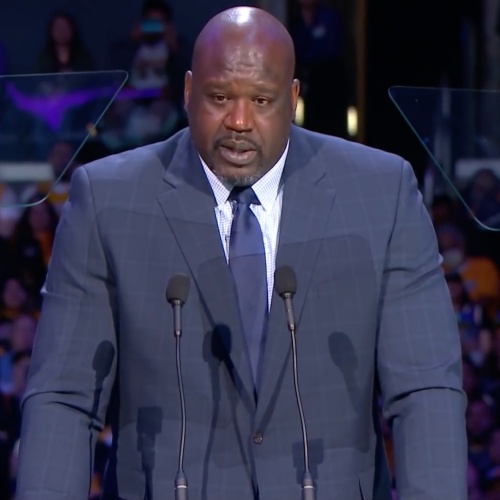 So, how did Aaron Carter beat Shaq?

However, during this exclusive chat, the basketball legend also revealed the origin story behind Carter’s 2001 hit single and music video, “That’s How I Beat Shaq.”

As the retired athlete recalled, he became acquainted with young Aaron Carter when Nick Carter’s then unknown vocal group, Backstreet Boys, recorded their demo at his house.

“One of my worst mistakes ever was not signing the Backstreet Boys,” Shaq reflected. “They recorded their first album in my house, ’cause they were just kids trying to come up with a demo. I think I charged them $5 an hour for my studio.”

Per Shaq, he “knew the Carters very well,” especially as “Aaron would always come over.”

During one of these visits, Aaron and Shaq participated in a game of H-O-R-S-E, where the young singer-songwriter won against the 7′ 1″ athlete.

Shaq continued his walk down memory lane as he honored his late teammate Kobe Bryant. Shortly before his HappE! Hour appearance, Shaq shared a photo of himself, Kobe and Rick Fox at the Los Angeles Lakers 2002 Championship Parade.

“I posted a photo, 20 years today, I think, Kobe and I had our second parade. Second or third, I’m not sure,” he shared. “Just seeing memories of him, looking always with a smile on his face, wish he was still here.”

As E! readers surely know, back in January, Kobe and his 13-year-old daughter Gianna Bryant died when his private helicopter crashed into a hillside in Calabasas, Calif.

For all of this and more, watch Shaq’s full HappE! Hour here

Fifth Avenue is going out of style for luxury retailers, as coronavirus erodes sales

ARM-based Japanese supercomputer is now the fastest in the world