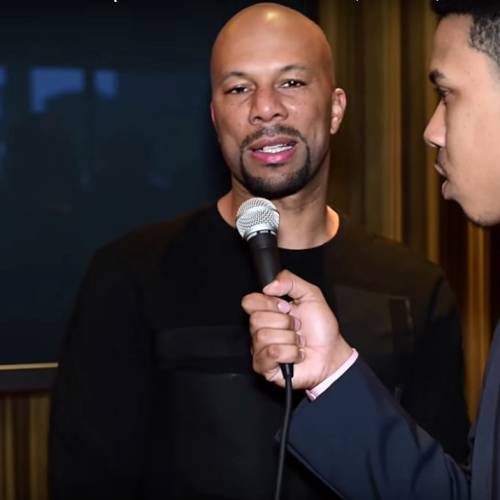 COMMON, ARTISIT AND ACTIVIST
On why juvenile justice reform is so important to him: “When you’re young and in a difficult situation, it’s hard to make good choices…We have to give our young people better opportunities to live and correct themselves and be forgiven… So for me, I’ve seen people that could be my children in prison and being treated less than human beings and I just can’t help but think about really creating opportunities for them.”

.@common explains why juvenile justice reform is so important to him. “When you’re young and in a difficult situation, it’s hard to make good choices…We have to give our young people better opportunities to live and to correct themselves.” https://t.co/mBmTxGl0z1 pic.twitter.com/b0BEdbXyhE

On what early releases due to COVID-19 are teaching us about the incarcerated and previously incarcerated: “Crime hasn’t jumped up, the world hasn’t turned around anymore because people are incarcerated got out. It let’s you know that there are hundreds of thousands of human beings that deserve to be back in society… The prison system has to be that thorough enough and caring to assess and say these individuals have committed crimes, they’ve served their time… They deserve to be back in society and we can get them back to society in a healthy way.”

“Storytelling has a way to touch people’s hearts in ways the news doesn’t. I feel like the art is really storytelling where a person can receive entertainment on certain levels, transformation on certain levels, inspiration and healing. I’m a true believer that art provides all those things.[…] I went to ten prisons in the state of California and performed… The way the music brought light out of all the individuals who were incarcerated.[…] It just let me know the power of art and what it can do to heal us and inform us.” VIEW CLIP

SCOTT BUDNICK, ANTI-RECIDIVISM COALITION FOUNDER
On prisons becoming hotbeds for the coronavirus: “Well, let’s also not forget it is absolutely impossible to social distance in there… you also have to realize and rightfully, I understand it… All of these correction departments stopped visiting, so no one sees their family anymore. They stopped all volunteers, so any of the positivity that was coming in there, gone.[…] So we started a hope, an inspiration series where we bring on special guests and it gets beamed into prisons where over 600,000 people get to watch… and get hope and inspiration.[…] So many people that are in prison are there because we’re not scared of them we’re just mad at them.

“We have to confront things that are uncomfortable for us. I had a conversation with my family in Atlanta about how we as a country have never fully confronted our past of slavery and the fact that we had human beings that were slaved, that were whipped which is just an atrocious thought that we did that… I think it is important for us, it’s easy to forget our past.[…] I’ve seen post George Floyd… them start having conversations and understanding for the first time wow sometimes it’s just so hard to be black or raising a black child. To hear my own family, my white family from the south say that… I think we’re moving in the right direction” VIEW CLIP

JARRETT HARPER, REPRESENT JUSTICE AMBASSADOR
On needs of people integrating back to society: “I really believe we need to ban the box. A lot of companies actually exclude people who have records. It’s known when you’re in prison, when you get out you have a record. You know you have to go into some of the worst jobs possible even though you may have a skill, you’ve rehabilitated yourself, you’re still not in a fair place when it comes to the work force. So ensuring that people who are returning actually have a fair chance when it comes to employment, housing and enough income to actually reintegrate back to society.”

On his 20 years behind bars: “I look at the crisis we’re in right now. A little over a year ago, I escaped covid-19. In a sense of becoming infected while in prison. That was always my worst fear, dying inside of a human made cage.[…] Right now everyone needs that support because their scared. So for me, actually looking back and looking over my shoulder and reaching back to pull my brothers and my sisters up and even juveniles who are in detentions centers… It’s the right thing to do”