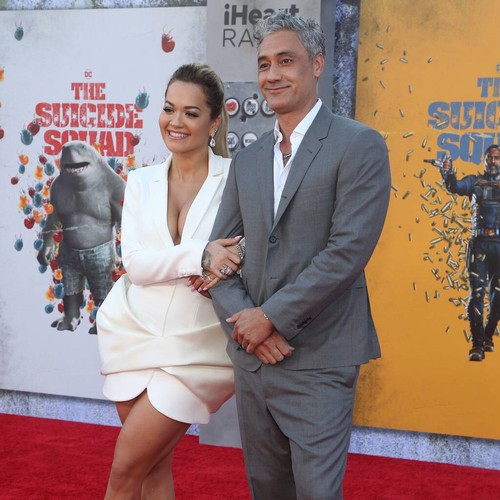 Rita Ora and Taika Waititi made their red carpet debut as a couple at the premiere of The Suicide Squad on Monday.

The couple were first romantically linked earlier this year and were spotted kissing on a balcony at Waititi’s Sydney, Australia, home in May, along with Thor: Love and Thunder star Tessa Thompson.

However, it wasn’t until Monday that they had posed together as a couple, as they were snapped arm in arm and holding hands on the red carpet at Los Angeles’ Regency Village Theatre.

Rita, 30, and Taika, 45, also smiled and joked with together as they arrived at the event to watch James Gunn’s new superhero movie, in which Waititi has a small role, believed to be the original Ratcatcher, who serves as mentor to Daniela Melchior’s Ratcatcher 2.

A host of stars including Margot Robbie, Gunn, and John Cena were present at The Suicide Squad’s Los Angeles premiere, which comes ahead of its U.S. release.

The photos of Waititi, Ora, and Thompson together in May caused something of a stir as the filmmaker was directing Thompson in Thor: Love and Thunder at the time

Reacting to the controversy over the snaps, Waititi told the Sydney Morning Herald: “I think in the world of the internet, everything goes away pretty quick. And also, is it that big a deal? No, not really. I was doing nothing wrong. It’s fine.”

David Crosby: ‘I should have kept my mouth shut about Eddie Van Halen’ – Music News